The Netherlands has many laws and regulations to protect consumers in the area of sale, supply and promotion of products or services. The Dutch Authority for Consumers & Markets (ACM) ensures that companies comply with these rules. In recent years, however, the ACM seems to be watching companies more closely. In this blog, we discuss some developments and trends in the ACM’s enforcement practice in the field of consumer protection legislation.

Selection of sectors and companies for enforcement action

ACM’s resources are limited, so it must decide in prioritization of enforcement. Reports (complaints) by consumers are an important source for the ACM to discover possible infringements of the consumer protection rules. In addition, the ACM actively looks for infringements and receives information through national and international partnerships.

In practice, the ACM regularly focuses its enforcement of consumer laws on specific sectors. In such a case, the ACM often simultaneously investigates several companies in a certain sector. In the context of its sector-based approach, the ACM appears to have developed a specific modus operandi whereby it (i) first conducts a preliminary sector-enquiry, (ii) then warns specific companies in that sector and (iii) finally it enforces the law against a selected group of alleged offenders. In 2021, for instance, the ACM applied this three-stage approach with respect to misleading sustainability claims in several sectors.

Due to the increasing number of sector investigations, the ACM sometimes uses selection criteria (such as the number of complaints / reports received by the ACM) to select certain  parties for enforcement. The ACM’s selection process regularly leads to legal disputes. Due to the limited enforcement capacity of the ACM, selection as such is allowed, but the authority must comply with the general principles of good governance, including the principle of equality.

Investigations and enforcement in practice

The ACM can use its many investigative instruments and powers in its enforcement actions. Since its early days, the ACM (and its predecessor the Consumer Authority) has been carrying out unannounced inspections (dawn raids) as part of the enforcement of consumer protection rules. Also, the ACM uses information requests to gather data. 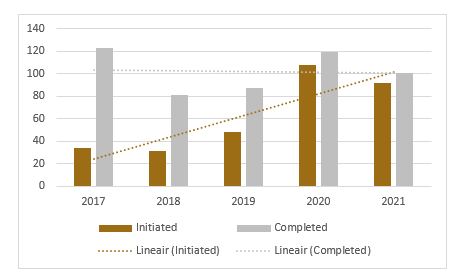 Table 1: Number of initiated and completed ACM investigations in the field of consumer protection per year and trend.

The number of fines imposed annually by the ACM for breaches of consumer protection rules fluctuate (see Table 2). Large (sector-wide) investigations seem to have a large impact on the number of fines per year. In 2019, for example, the total number of fines was high because the ACM imposed several fines simultaneously on kitchen suppliers and telecom providers.

Table 2: Number of ACM fines in the field of consumer protection per year and trend.

Table 3: Number of ACM orders subject to a penalty in the field of consumer protection per year and trend.

The ACM is becoming more active in the enforcement of consumer protection rules. In recent years, the ACM’s investigations have become larger and the ACM often uses its ‘three-stage approach’ to select the main offenders for enforcement. While the number of fines varies from year to year, the number of investigations and orders subject to a penalty show an upward trend. In view of the ever-expanding scope of the ACM’s duties in the area of consumer protection, it is expected that the enforcement of these rules by the ACM, and possible sanctions, will increase in the coming years.

A more extensive article by our competition law experts on the enforcement of consumer protection legislation by the ACM was recently published in the magazine Bedrijfsjuridische berichten (Bb 2022/15).

The war in Ukraine has created a unique situation in the international energy market. To combat rising energy prices, the …

Claim vehicles, come to the Netherlands?!

On 27 July 2022, the District Court of Amsterdam (the Court) rendered another interesting (interim) judgment in the follow-on damages …